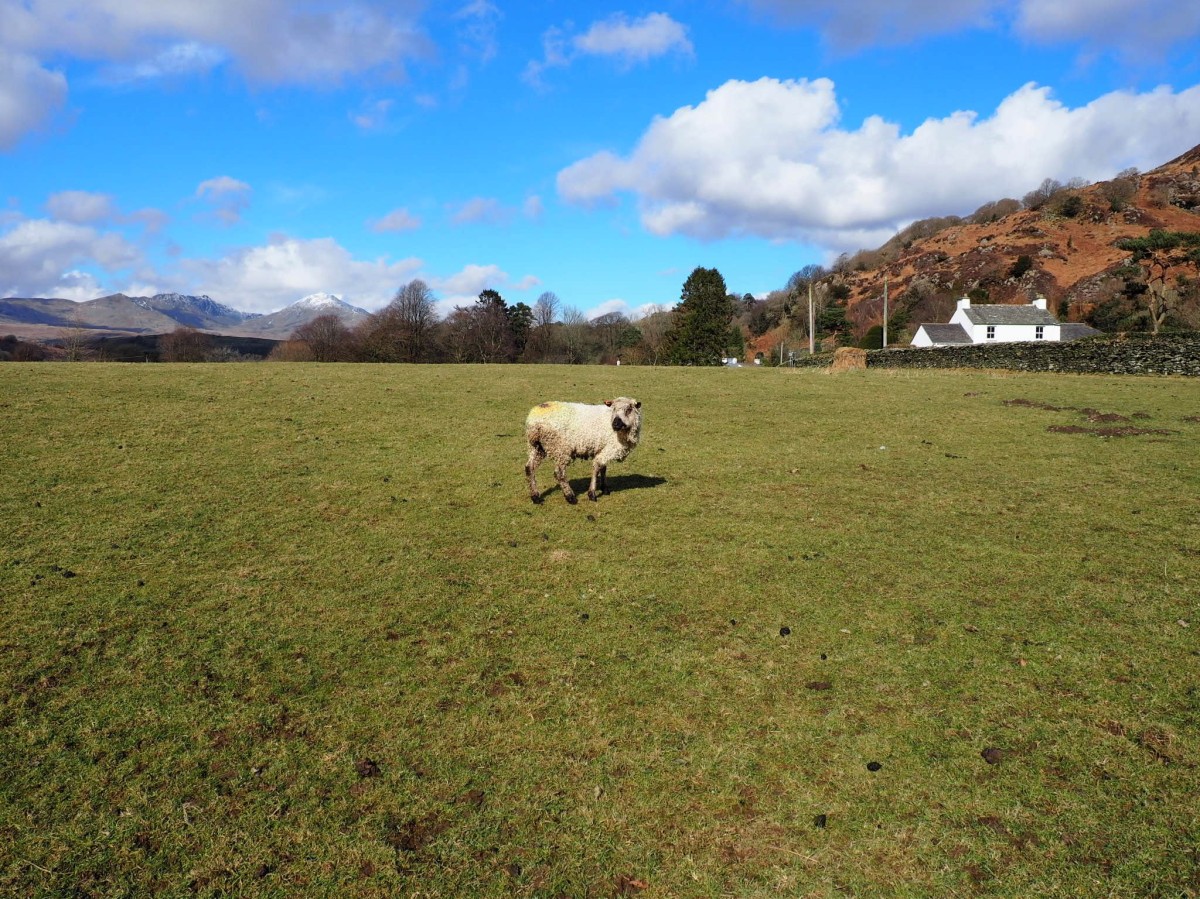 Last week I had the chance to go along with Kate from Northern Yarn to Dodgson Wood, a beautiful farm in Cumbria where John and Maria raise rare breed cattle and sheep, practice conservation grazing, run off grid accommodation, and produce gorgeous soaps (from the milk of their Jersey cow) and, of course, wool! Beautiful, single farm, breed specific yarns — what could be better?

The farm, which John’s family has been farming on for six (!!) generations, is nestled in Cumbria at the bottom of the Lower Lakes.  We’d actually put our trip off for a week because of the “Beast from the East” and the forecast for last Tuesday looked like it might be a bit gray — so we were pleasantly surprised with sun and blue skies (but you can see the snow-capped fells in the distance!)  When you pull up to the farm, you’re greeted with the happy sound of clucking chickens and ducks, as well as some geese who keep a careful guard of the farm and a watchful eye on the road for new comers!

Maria and John keep a variety of sheep, including Cheviots, several of which are rare breed , like fiesty horned Castlemilk Moorits (they have a fascinating history that you can read about here) and the long wooled Teewasters: 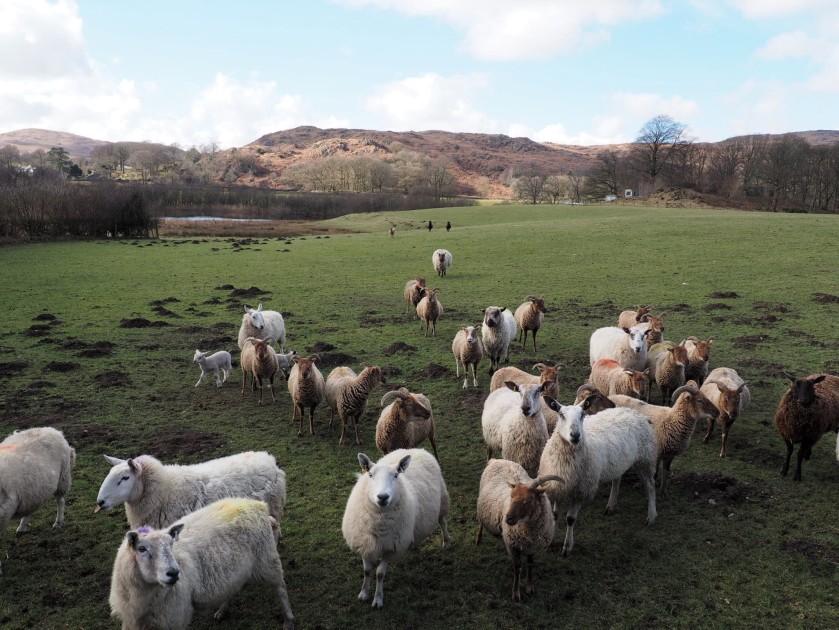 This little one isn’t a pedigree Castlemilk Moorit because of the unusual markings on its face, but I love how still and regal it looks — almost like it new I was taking a picture!

When we arrived last week, lambing and calving season was already in full swing (another reason it was extra nice of John and Maria to spend time showing us the farm!) Ewes pregnant with a single lamb, and ewes who have already given birth to just one were out in the fields.  Kate and I got to go out to the field with Maria while she gave the flock some extra food and checked for any new arrivals!

No new lambs in the field (Maria actually told us that the ewes almost seem to prefer lambing on rainy, wet days, rather than when the sun’s out) but we did get to see two little lambs frolicking in the field and playing a game that involved lots of headbutting!

Maria and John also have a small but growing flock of Teeswater sheep, a rare breed long wool sheep.  In fact, their flock is growing as we speak — when we were there, we got to have a peek at two sets of Teeswater twin lambs that had been born that week!  Twins and their moms, as well as ewes expecting twins, had been moved into the ewe “maternity ward” where Maria and John can keep an extra eye on them, making sure they get on all right and that the mothers are taking care of both lambs (sometimes, the ewes prefer one lamb over the other and some intervention is needed to make sure both lambs get enough food!)  I love the distinctive, long curly locks of the Teeswater — and the little lambs’ new coats of tight curls were so sweet!

Maria even let us give the lambs a little cuddle …. and oh my goodness, holding a days-old lamb certainly does the heart good!

Look at that face!

Spending a few hours up at the farm, I was so struck by the beauty of the place (it really is breathtaking) but also what an awful lot of work it takes!  John and Maria wear so many hats.  It’s very clear how much they care about all their livestock, and what a lot of work they are — Maria had been up every two hours the night before we came checking on the pregnant cows and ewes; they’d both been up in the middle of the night because a Belted Galloway cow had given birth to her calf up against the railing of her pen — the force of her labor had pushed the little calf through the pen’s rails and separated the two, so they’d had to get the calf back in it’s mother’s pen (mother and calf were both doing very well when we arrived).  They get their gorgeous wool spun into yarn, sell meat and some of the livestock, run off grid accommodation, and Maria’s also making the most glorious Jersey milk soaps … she sent us home with some, and I’ve been loving the one I’ve been using on my hands!

It was so inspiring to see two people so passionate about what they do, pursuing so many creative ventures on their farm.  My only regret is that I didn’t take more pictures of the farmhouse, cows, chickens — I was so interested in hearing more about the farm (and, let’s be honest, cooing over the lambs)  that I wasn’t as handy with my camera as I would have liked!  But then again, there’s only so much you can capture in a photo. The overwhelming vitality of the farm — the lambs and ewes happily bleating to each other; the sound of pregnant ewes snuffling up their food; the chickens that boldly darted anywhere and everywhere in the farmyard, scampering through the legs of cows; and all the hard work happening on the farm — I suspect that even had I taken 1,000 pictures, some things just can’t be captured.

I came home happy and now have a freezer full of meat that I know I can feel good about eating, a sheepskin that is so soft I move it from room to room to sit with, and a renewed desire to cast on with some of the beautiful Shear Delight yarn that comes from the farm. I’ve had my eye on Dodgson Wood yarn since my very first visit to Northern Yarn and getting to know John and Maria a bit and seeing their happy sheep has made me want to knit with their beautiful yarn all the more.  I’m thinking an Incunabula out of one of their DK blends or maybe trying out a two-color version of Kate Davies’ gorgeous new Myrtle in their Teeswater lace. And I’ve also been contemplating a pair of Otrera Mitts in their Cheviot first shear DK.  So many knits, so little time!

Dodgson Wood have an online shop where you can shop for all their different farm produce, from meats, to their Soap Dairy soaps, and their Shear Delight yarn and sheep-related products!  And if you’re in Lancaster, you can see the yarn and soap in person at Northern Yarn!

Such a big thanks to Kate from Northern Yarn for inviting me along and for John and Maria for being so generous with their time, especially given the busy-ness of spring on the farm! I love this picture of the two of them with one of their new lambs — I think it really captures the love they have for what they do!

Alright, I better go get packing for EYF! If all goes according to plan, I’m going try to pop in here with little daily photo updates if you’d like to follow along!

Hope your week is off to a great start!  xo K

Phew, is it Tuesday already?  I’m still in a happy, yarn-fume induced haze from the amazingness that was Yarndale.

In fact, it was just about the perfect weekend.

END_OF_DOCUMENT_TOKEN_TO_BE_REPLACED

Phew, is it really December?

It’s the first Thursday of the month, so time to talk about some socks!

END_OF_DOCUMENT_TOKEN_TO_BE_REPLACED

Hi friends, and happy Friday!  I’m excited to share some of my favorite things this week with you.

I’d love to hear what patterns/recipes/etc. you’ve stumbled upon and are excited about this week!

Also, I wanted to share a little something I’ve been thinking about the past few weeks.  I love all of my end-of-week blog “commitments” (Yarnalong, Thursday Sockalong and Friday Favorites).  But with the way life as the moment, I’m finding it difficult to get those posts out each week and still have time for more spontaneous or project-specific posts. So, for the time being at least, Friday Favorites will move to an every other week format.  We’re ironing out the details, but the group of us who do Thursday sock posts are also going to move to less frequent, but more in-depth, posts about socks.  So they’ll be some little changes around here, along with (hopefully!) more varied posts.  Want to make sure you don’t miss anything?  You can sign up to get email updates on the sidebar, or follow me on Bloglovin’! And I’m regularly over on Instagram @fiberandsustenance.

Hi friends!  How’s your weekend going?  We’ve been spending loads of time out on the back deck, relaxing and crafting … a perfect Labor Day weekend, if you ask me!

And it’s been even more perfect than usual because we had a very exciting start to the weekend.  Remember Thursday when I mentioned I had an upcoming adventure that I was really excited to share?  Well, here it is!   On Friday afternoon, my mom and I hopped in her little Fiat and tootled out to gorgeous Rose Lane Farm in Rocky Mount, Virginia.