Well this post has been a long time coming!  But, I’ve finally woven in the ends and blocked my Find Your Fade!

END_OF_DOCUMENT_TOKEN_TO_BE_REPLACED

Well friends, my visa is finally en route, though even the mailing process hasn’t been smooth … it seems like if anything that can go wrong with this process, it has!  But I’m grateful it’s finally on the move, and I’ll be joining Mr. N on the other side of the pond before too long. END_OF_DOCUMENT_TOKEN_TO_BE_REPLACED 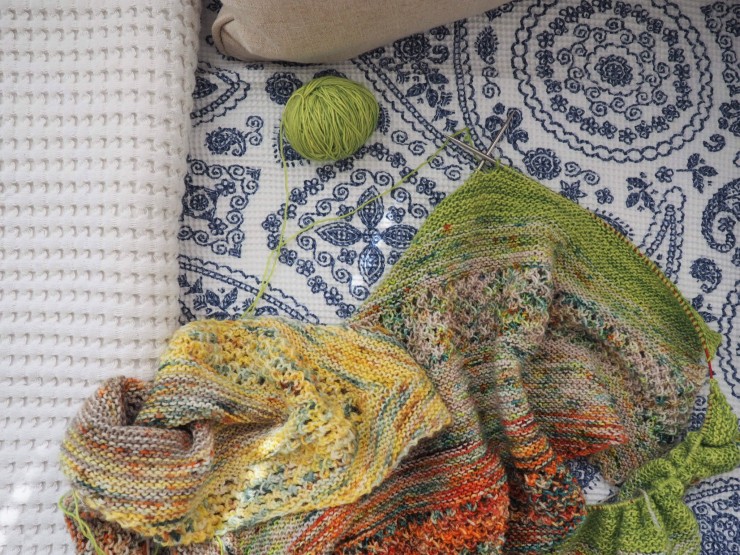 See that? The Fade is growing! After so much fretting over the lime green, I’m super happy with it in the shawl.

The shawl’s of course not done yet, but our cross country trip has come to an end.  Mr. N flew across the pond yesterday.  My visa, sadly, is still missing in action.  The online tracker for UK immigration says the application was decided August 4 …. but it’s never been mailed.  For now, we’ve rebooked all my travel for Friday, and I’m staying with a dear friend in Baltimore and waiting things out.  Fingers crossed it all goes in the mail tomorrow.  In the meantime, I’m looking forward to catching up on what I’ve missed while I’ve been traveling and writing a bit more about some of the bits of the trip I haven’t shared.  More soon xo K

Phew, I didn’t mean to go quiet for quite so long!  We spent a three-day weekend in St. Louis for one of my best friend’s wedding, and I was co-maid of honor, and it was quite busy!  But loads and loads of fun.

So first of all, a massive thanks for all your thoughts and advice on my Fade color conundrum.  It gave me lots of food for thought — y’all thought of things that wouldn’t have even occurred to me — and I’ve tried out lots of different things as a result (there’s been swatches, decisions made, decisions unmade and frogged … ) I think I’ve sorted it out now, and I’m excited to show you when I get a bit further!

In the meantime, I thought I’d do a very quick recap of where we’ve gotten since we last spoke … we covered quite a bit of ground.

Before we left Kansas City on Thursday morning, we did a very quick bit of sightseeing.  We had a really lovely, if too brief, visit to the WWI Memorial.  It’s really stunning (plus offers great views of the city).  I only wish we’d had time to explore the museum, as the exhibits looked excellent. 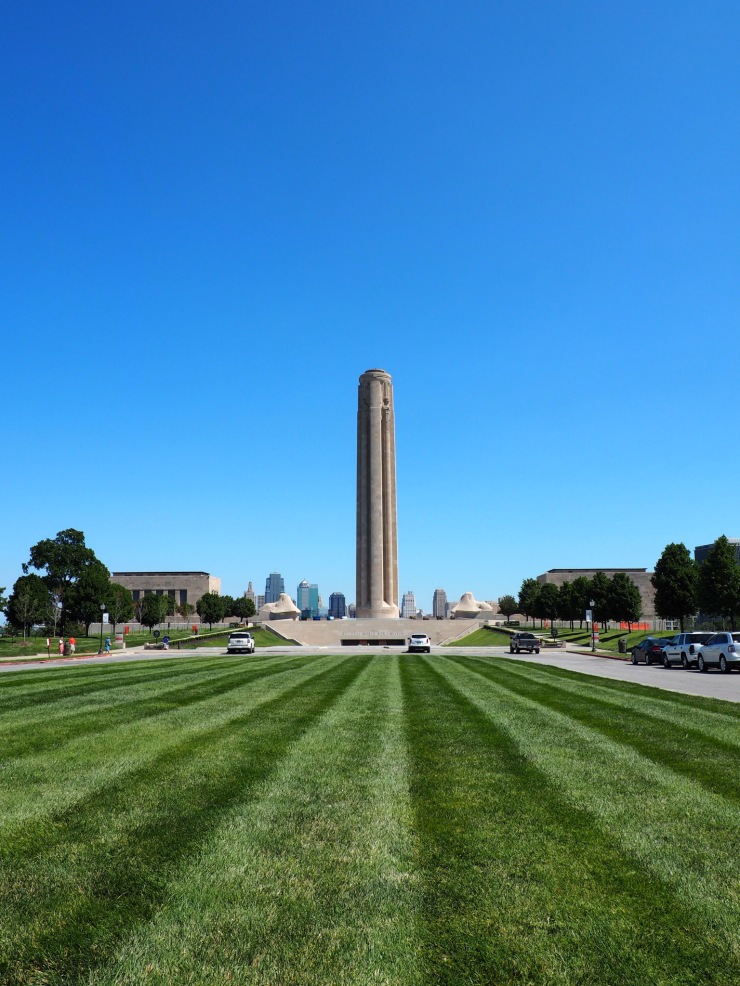 As it was, we had a nice walk around and peek in the gift shop.  Check out this upcoming knit night they had planned, inspired by women’s sock knitting in WWI — what a cool idea: 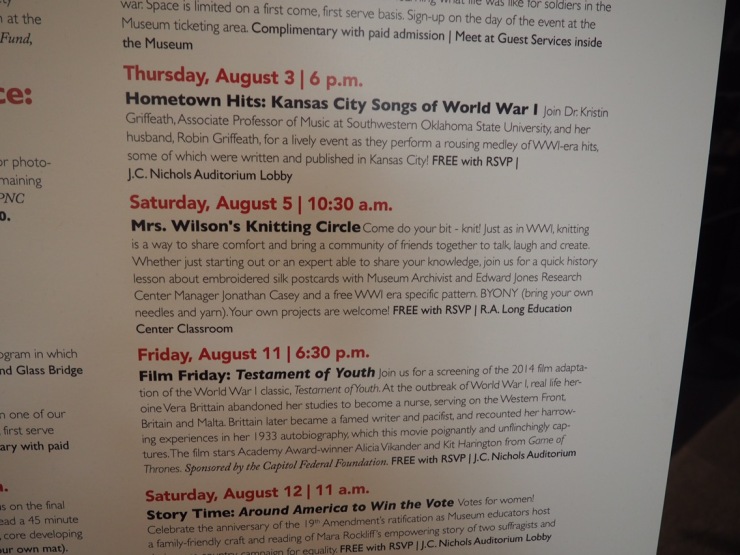 We then pressed onto St. Louis, where we had a full three days of wedding fun.  We got back on the road Sunday after a farewell brunch for the couple — and made a quick stop by the St. Louis arch:

And not far out of St. Louis, just over the Illinois border, we made another flying stop to the Cahokia Mounds — the largest Native American pre-Columbian site north of Mexico.  They were quite impressive:

We were in the largest number of states so far on Sunday–Missouri, Illinois, Indiana, Kentucky–but it was also the worst weather (at least til that point), so not very conducive to photo taking!

After a late arrival in Lexington, Kentucky and a very rainy night, we were back on the road this morning. We stopped at the Capitol Market in Charleston, WV for a quick lunch – fish and chips that blended southern and British, perfect for Mr. N and me (note especially the half sweet tea and hush puppies):

A break in the weather allowed us to enjoy a quiet overlook a bit later: 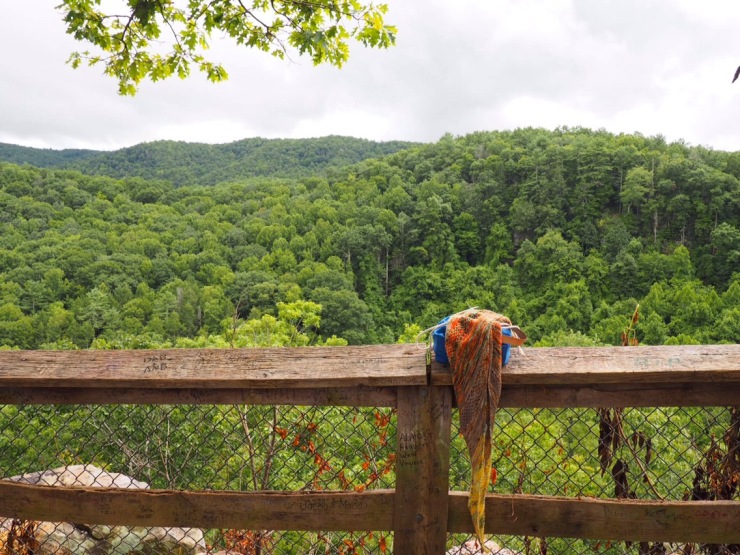 And after more driving and more raining … we’ve made it to my parents in Virginia!  Woohoo!  We’ll have a few days here … which of course means lots of knitting with my mom and sis 😀

So I mentioned yesterday that I’ve been dithering about my Fade colors. Initially, this was my plan (apologies, these photos aren’t the best..)

As I’ve been knitting along though, I started to have doubts — most shawls I’ve seen have tended to move from light to dark — would having a big chunk of light gray at the end ruin the fading effect?  So yesterday, when we stopped in Salina, Kansas for lunch, I stopped in the local yarn shop thinking I’d get a new color to swap in and ditch the lime green — I worried it was maybe too bright and too solid for the fade. After much hemming and hawing, this is what I came up with: 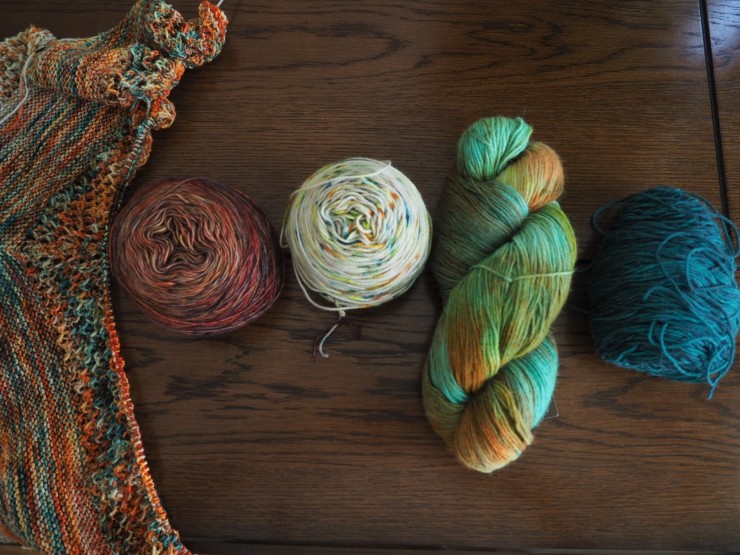 As we drove on though, the second guessing started. Do I really want more reds in the shawl? And the new yarn has a fair amount of pink and purple hues — I think it might throw the whole thing off.  When we stopped in Abilene just down the road, I saw another yarn shop, about to close … and I picked up another skein, this time of green. Which I imagine could go like so, for a Plan C:

After all of this, I wondered if it was best to go back to the original colors, but swap them around, to make Plan E: 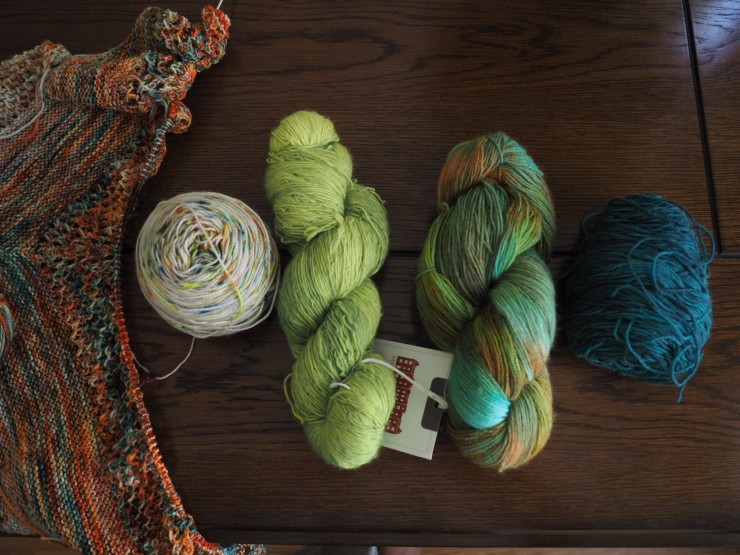 Phew.  I realize I’m over thinking all of this … I’ve just been so pleased with the colors so far, I don’t want to ruin it halfway in!  Which do you prefer?  I have about 6 rows of garter before I have to make a decision — any advice greatly appreciated!

It’s hard to believe, but Mr. N and I only have two weekends left until we hit the road, starting our road trip East and, ultimately, our trip across the pond!

So this weekend has been all about recharging our batteries after a very busy first half of July and finalizing details for our trip (and hoping my visa comes through soon and doesn’t through a wrench in our plans!)

And as much as there’s still stuff we want to see and do in LA, it’s been nice to have a slow-paced weekend.  We did venture out yesterday to Gather DTLA … I wanted to see about buttons for my Talmadge Cloche (unfortunately, they were out) and check out the Long Dog Yarn trunk show. She had so many pretties, but I restricted myself to a skein of her Sock yarn in Wild Child and this adorable mini skein of Seaglass:

END_OF_DOCUMENT_TOKEN_TO_BE_REPLACED

All images and content, unless otherwise credited, are Copyright © 2016 by fiber and sustenance. If you'd like to use something you find here, please be in touch.