A flying note on the eve of traveling to Edinburgh Yarn Fest (!!!) … my second ever pattern, the Burgeon Socks, is now available on Ravelry!

I knit these in Retrosaria Mondim, a 100% Portuguese non superwash wool yarn — I can’t recommend it enough!  The bobbles stand up to variegated and speckled yarns, but also really shine in more solid yarns!  The pattern has been thoroughly tested — I’ll be sharing some of the gorgeous test knit versions on Instagram in the coming days.  Massive thanks to those who took the time to test this pattern! 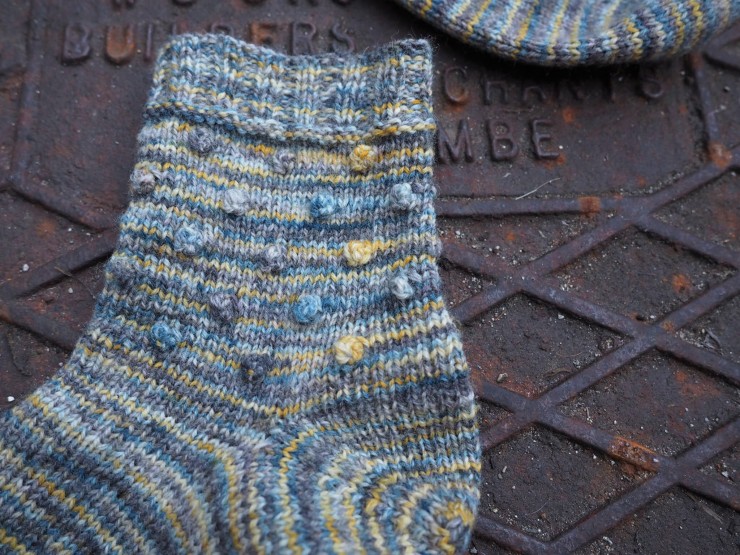 I did a lot of experimenting with bobble size to get something that popped but was still practical for everyday wear.  These are subtle bobbles, that would easily sit under anything but the skinniest of skinny jeans … but why not show them off! I’m partial to wearing them with skirts and dresses and love trying them out with different shoes!

The pattern, with its combination of simple texture and plenty of plain stockinette, is suitable for confident beginner sock knitters — or great if, like me, you like plain socks, but need just a little something to keep you engaged while you knit them!

These began their life as a Christmas Eve cast on in Australia …. I knit them two at a time and was planning on some perfectly plain socks. But I’d had this idea knocking around in my head for awhile, and on the flight back, I decided to try out my bobble idea on the legs — I have to say, I’m a little obsessed with them!

Rather than offer an introductory discount on these socks, I’ll be donating 15% of the first month’s pattern sales to RAIS Lancaster, an organization local to me that provides advocacy, information, and support to refugees in the community.  While I don’t know that I’ll become a pattern writing machine anytime soon, I hope to choose a charity for each pattern I publish to donate to going forward.

I’m so thrilled to have the Burgeon Socks out in the world, and I hope you love them as much as I do.

Off to pack for EYF — if you’re going and see me there, do say hello!

Another 🌧 morning, so dug out all my hand knit hats for us to play with to try to change things up! This is the first she chose, excellent taste obviously and surprisingly coordinated with her outfit! @ellagordondesigns Houll Hat, which she wore for a good chunk of the morning’s sticker sesh … I loved her completely delighted expression when she saw her reflection in the hat (second photo). She then swapped for a hat I knit a dozen years ago that’s always been a bit too small, the Botanic Hat by @westknits … it’s finally found it’s perfect recipient 🥰
Hooray for sunny Sundays by the bay, and for homemade outfits !
Sunday morning knitting …
Yesterday my baby turned 2! 🥳🥰😭
Tuckered out tot + first layover = time for a few rainbow rows
Labor Day evening ✨