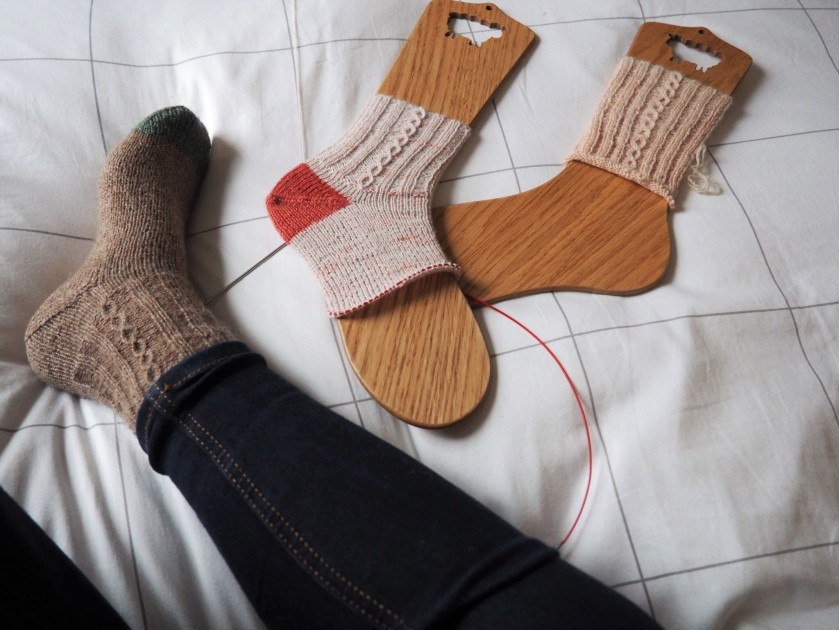 Hi friends, and happy last first Thursday of the month for 2018!  If you’re new around here, every first Thursday a group of us post about socks.  Paula hosts a little link up over at Spin a Yarn so that people can join in any month that suits.  I’ve not made much sock progress since last month, so I’ll quickly tell you what I’ve been up to and then talk a bit about handknit socks and fit, something I’ve been thinking about a lot.

Back at the end of October, I cast on two different Parkamoor Socks using two different yarns for the little Parkamoor Socks KAL I’ve been running (more on that in a sec).  I was (and am) really excited about two new no-nylon sock yarns and rather than choose which to start knitting with first, I thought why not cast on two pairs.  I don’t know why I thought that was a good idea. I know there are some people who whip up a sock in a week … I am not one of those people.  I like to knit socks, but they’re a background project for me — something I grab when I need a small and portable project.  And my sock knitting energy comes in fits and starts.

You can see where this is going. The KAL is drawing to an end.  And I’ve not finished a single sock.  I’ve finally gotten an afterthought heel in one, knit in Woolly Mammoth Fibre Company‘s Natural Sock  — the main color is called Rusty Leaves, the contrast heel is Bonfire. And I’ve completely hit a wall with my Black Isle Yarns pair.  First, I realized I’d dropped one of the purl stitches of the cable panels without noticing about halfway through the leg …. I caught it and laddered it back up, but it didn’t look the tidiest.  I pressed onto the heel flap, which I started late at night, and knit it for the wrong size (doh!). I ripped back to restart it, only to realize I’d entirely omitted another stitch in the cable panel, so it’s narrower on one side than another.  Bah! No one but me would notice of course, but given I was already unhappy with my dropped stitch fix, I’m thinking this might be a sign I just need a fresh start with this yarn. I’ll either re-cast on my Parkamoors or give Munlochy (designed by Clare Devine for the Killen sock yarn) a try. But for the time being, I’m going to focus on finishing up the Woolly Mammoth pair.

Which leads me to what I really want to talk about this Thursday: my changing thoughts on how to knit socks that fit!  A year or two ago, as I started wearing my handknit socks on the regular, I realized that the pair I reached for the most–my Tube Operators–were socks that I actually worried were much too small when I cast them off.  I used my sock blockers to give them a nice good block. And while they still felt a little snug the first wear or two,  they soon became my favorite pair to wear because they didn’t bunch up awkwardly in my shoes.

I’ve also started casting on fewer stitches for my socks.  In my Blacker sample of the Parkamoor socks (which I’m wearing in the above photo), I cast on the smallest size — a mere 52 stitches, and I’ve done the same for my in-progress Woolly Mammoth version.  And I’m knitting shorter cuffs … I find I am much happier with shorter socks that’ll peek out of my desert boots, or come up just a few inches from my sneakers, than I am with ones that reach nearly to my calf … especially since I am often wearing them with slim leggedjeans, leggings, or over stockings with a dress.

Knitting socks that seem demonstrably too small comes with pitfalls of course.  Even though I’ve tried it for a few pairs now, I still have several moments of panic when I go to try on my in-progress or recently finished socks. Even after I blocked my Blacker pair, they felt a little too short … but after a couple of wears, the fit’s perfect (I’m wearing them as I type).  And I can only get my in-progress Woolly Mammoth socks on with difficulty … but I’m telling myself that a good block and a wear or two will sort things out.

It’s just a hunch, but I think knitting socks on the small side might be a particularly good idea when using no-nylon sock yarn, as it works with the fact that the fabric may grow and stretch a bit.  But I’ve found in general, in no-nylon and bases with nylon alike, over time I’m much happier with the fit of socks that, when on the needles, barely fit onto my feet!

I have no idea if my approach will be useful for others.  I’ve got flat feel with low insteps which might make it easier for me to wiggle my foot into a nearly too small sock.  But I have talked with at least one friend whose knit the Parkamoor socks and found sizing down gave her a fit she was much happier with.  If nothing else, I hope this post is a good reminder that it is worth at least pausing before you cast on and asking yourself how you want to wear your socks — around the house, in roomy hiking boots, or tucked into sneakers or brogues? — and how they’ll wear over time.  From my (admittedly limited) experience teaching sock knitting, and hearing knitters talk about socks, it seems lots of people have very fixed ideas about the number of stitches their socks should have (i.e. “I always knit 60, 64, 72 st socks”) Obviously experience gives people an idea of what works for them, but after years of always casting on the same 60 or so stitches, I’ve found that embracing nearly too small socks has made them much more practical and comfortable, in the long run!

And last but not least, consider this the final klaxon bell on the Parkamoor Socks KAL!  If you’re knitting a pair (or thinking of casting on) do make sure you’ve either posted a photo on Instagram tagging me (@fiberandsusteance) and using #parkamoorsocks. If Instagram isn’t your thing, you can tag your project on Ravelry with “Parkamoor Socks KAL.”  No need to have finished to be in the drawing to win your choice of one of the above skeins of Woolly Mammoth Fibre Company Natural Sock.  I’ll be drawing a winner on the evening of Sunday, 8 December so I can post the prize before I leave for the holidays the following Wednesday.  And if you’ve been on the fence about casting on and want a little nudge, I’ve just launched a little surprise sale on the pattern. From now through Sunday, use the code LASTHURRAH on Ravelry for 10%!

That about does it for me! I’ll try to pop in here and update links when Paula’s got her monthly post up, but I’m heading out this afternoon for a few days in London so it might take a bit!  Happy sock knitting!