I’ve been sitting on this finished object post for ages, waiting to have the time to sit down and properly write about what is probably one of my favorite ever finished garments, my Incunabula Cardigan, knit in very special Shear Delight Castlemilk Moorit/BFL DK. 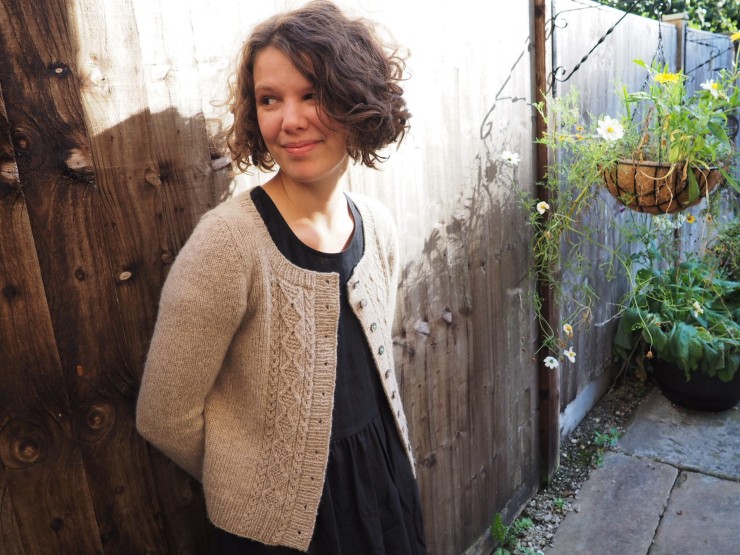 I think I always think my most recent finished object is my most favorite ever, but the benefit of it taking almost two months from cast off for me to write about this cardigan is I’ve had plenty of time to road test it.  Conservatively, I’d say I’ve worn this cardi at least twice a week since Yarndale, where it got its first real outing, at the end of September. It goes with everything, and I’m especially pleased that I can layer it without too many issues (often my hand knit sleeves are too tight to easily fit sleeves in!) 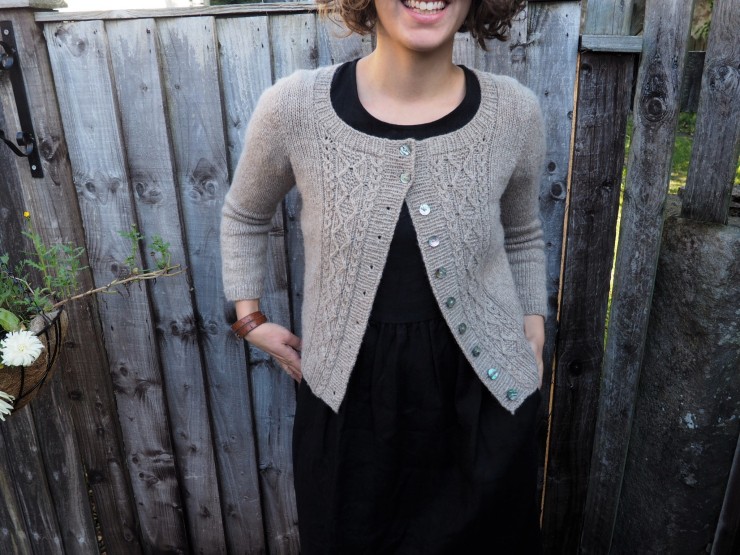 But before I get carried away with this cardigan and my wardrobe, let’s go back to the beginning … according to my Ravelry project page, I worked on this (not exclusively, of course) for five months.  I cast on the Incunabula Cardigan, from Karie Westermann’s book This Thing of Paper, in early April in Dodgson Wood’s Shear Delight wool.  In the weeks after I cast on, Mr. N and I were in deep discussions about what had begun as a rather fanciful idea that we might elope rather than have a big elaborate wedding.  As soon as we started talking about it, we’d settled on Dodgson Wood as the potential site, so as we weighed the possibilities I knit along on this (as well as my wedding shawl) in love with the idea that if it was a cold day, I could wear a lovely cardigan knit with wool from the farm with my wedding dress.

Of course, we did decide to elope … and the cardigan was nowhere near done on the day (my shawl and what would become the Parkamoor Socks took precedence).  In any event, we had unseasonably warm weather on the late May day on which we were married (nothing like the rainy, blustery day I kept worrying about), far too hot for a cardi!  But our lovely photographer Lucy suggested I bring some knitting up for our photos after the ceremony, so I did get to work on a row or two of the body in my wedding dress … I love that memories from the day are knit into this garment! 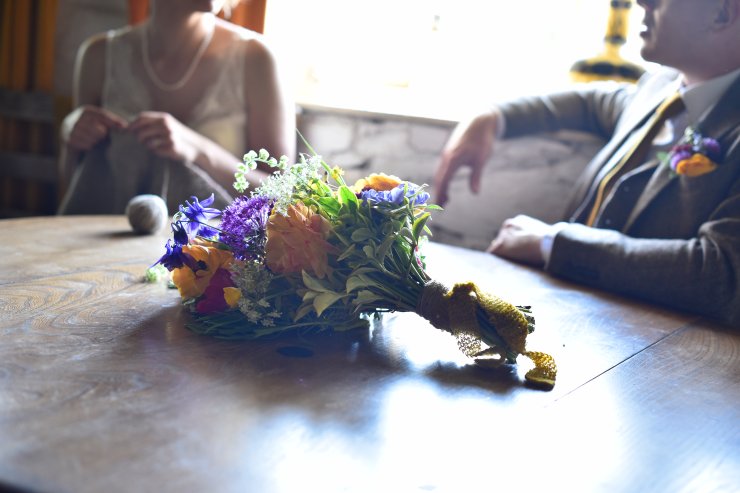 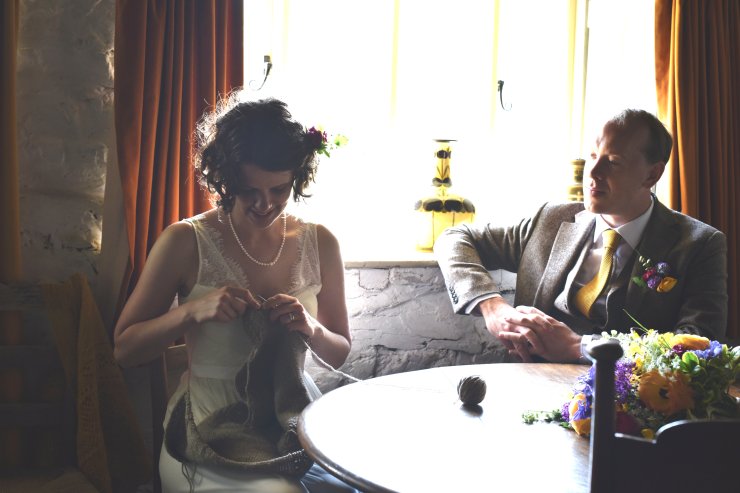 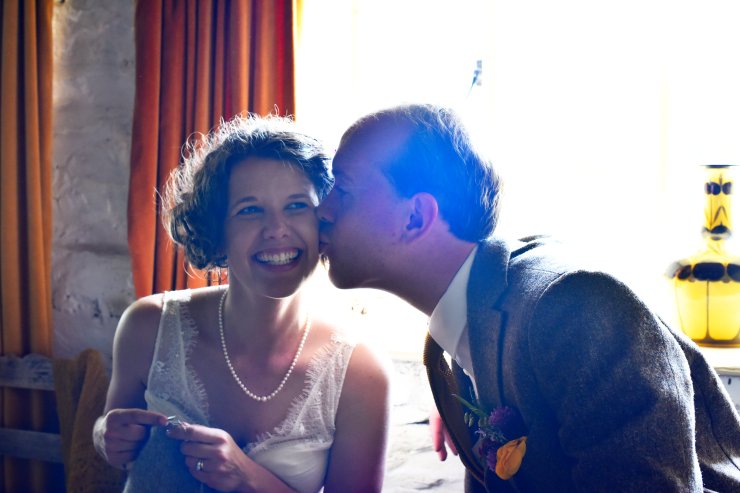 The cardigan itself was a labor of love, some of which I documented here on the blog.  As is often the case when I knit, my row gauge was tight, so I had to make lots of alterations as I knit to get things right. 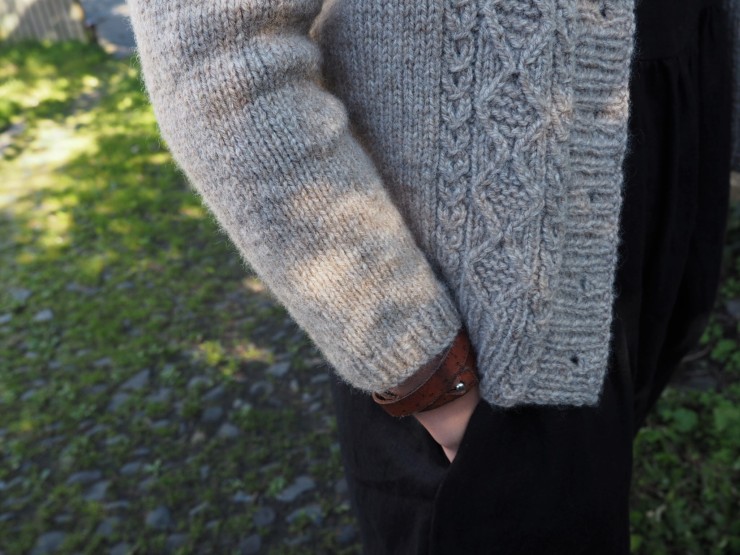 And I’m happy with that, because the yarn deserved nothing less.  I have written about Dodgson Wood before, and besides it being the spot at which we are married (which of course gives it a very special place in my heart), I think John and Maria are just really cool people working on really cool things.  I absolutely adored working with the mix of Castlemilk Moorit (sheep I wrote about some in the above linked post) and Bluefaced Leicester.  The Castlemilk give the yarn a warm light brown tone, the BFL gives softness and strength with its longer staple.  And the cable definition is amazing.  It was a yarn that was a true joy to work with, and stood up well to my repeated reknitting.  It’s worn well, with ever so slight pilling in high wear areas that’s easily removed.  My yarn was from the 2016 clip, which is all gone now, but the 2017 clip is now available (if you’re local to Lancaster you can see it at Northern Yarn too!).  It’s got more Castlemilk Moorit in this time, and I love the slightly deeper brown … and that this now means I can knit another sweater with this blend that won’t be the same color as this! 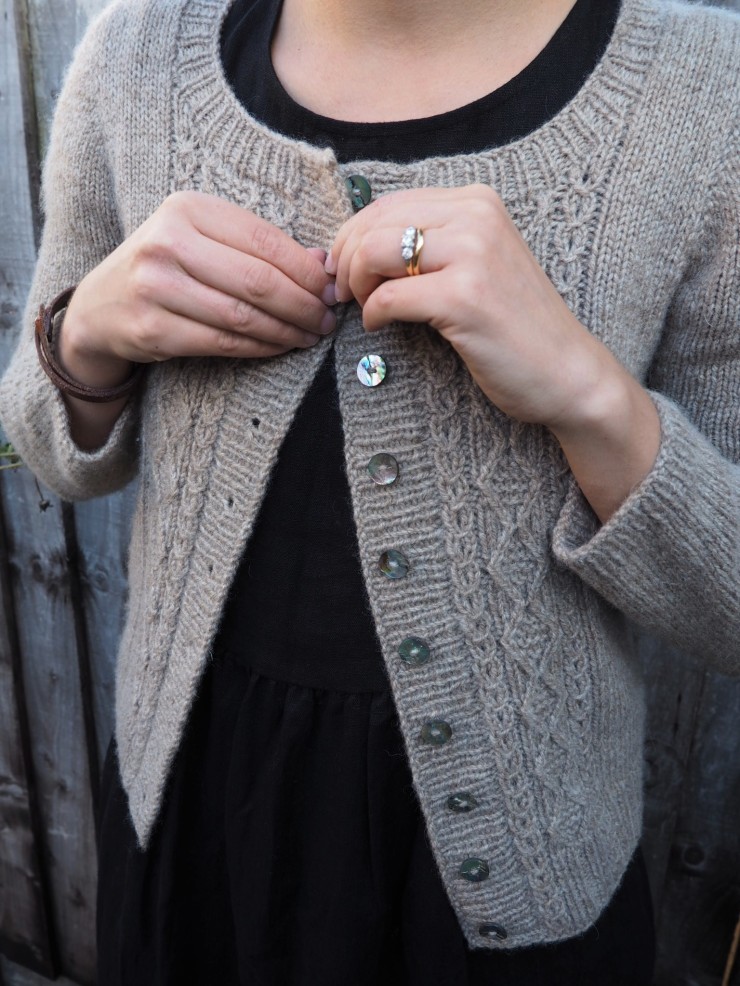 The cardigan is finished with Paua shell buttons, bought the last time we were in New Zealand, supplemented with a few more from Loch Sunart Yarns and Buttons. 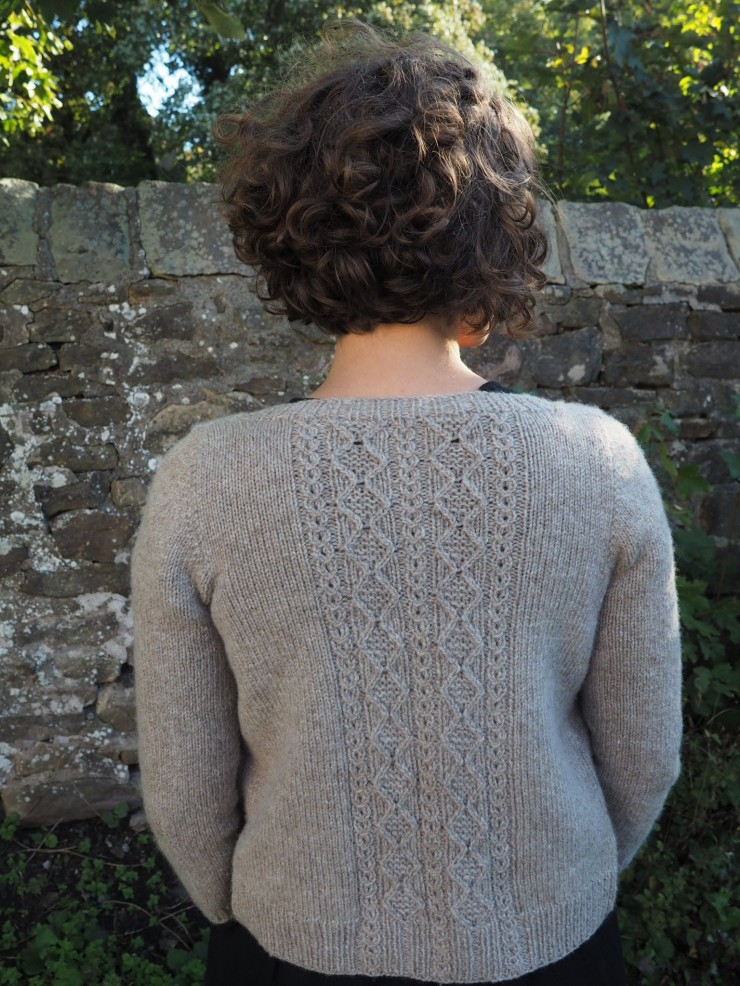 I really enjoyed knitting this and, as I mentioned at the beginning of this post, it’s becoming one of my most worn garments as it’s so easy to throw on.  But as with any make, there are a few things I would do differently if I were to knit it again (which almost certainly won’t happen) First, I would have worked one less repeat of the body.  I knit the size medium, which was supposed to give me 3-4″ ease, and as I said, left out the waist shaping, thinking it’d give me a boxy cardigan.  I also thought, based on my row gauge, that I was working this cardigan to a length where it would hit at my true natural waist, giving an almost cropped look.  I’m not sure what happened — maybe the armholes were bigger than I thought? But regardless, though this is definitely if not a long cardigan, it does fall well below my natural waist …  the short boxy cabled cardi of my dreams will have to wait for another time! Two lessons from this.  One, I should double check my math when adjusting for row gauge! And two, if I want things to have a boxy, oversized feel, 3-4 inches isn’t going to do it … you need more ease than that! 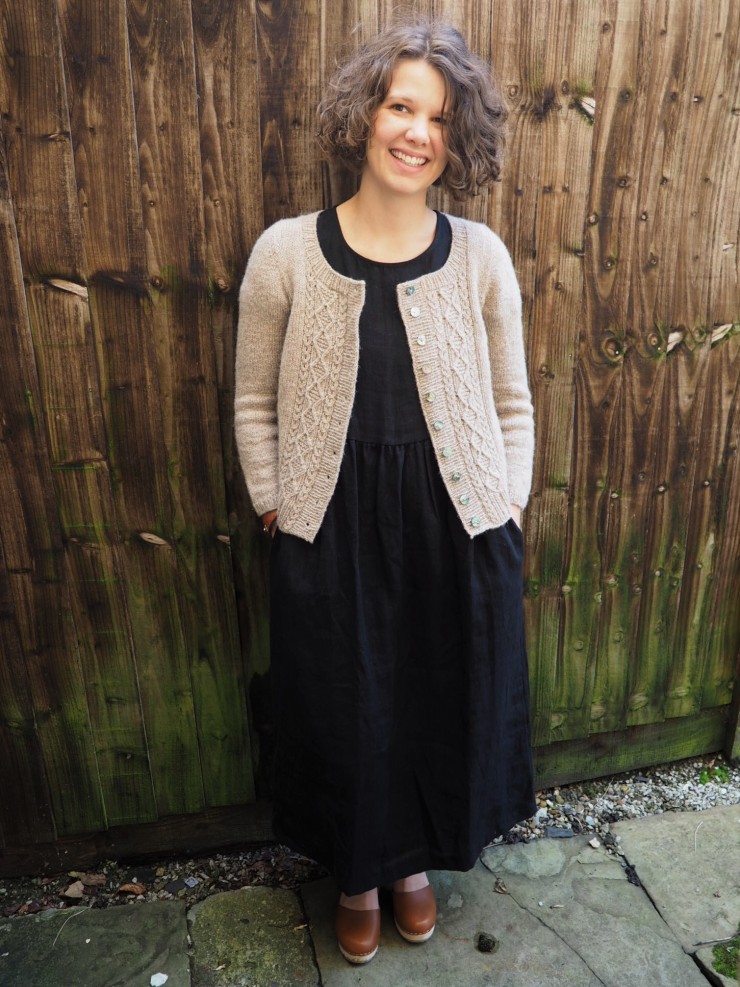 The other thing I’m not 100% sure about is the fit at the shoulders.  Something feels ever so slightly off.  I worried that the (and here’s where my lack of clothes making terminology will become clear) shoulder ….. girdle? straps? bits? were just a bit too narrow … that the shoulder “seams” should have been closer to the edge of my actual shoulder.  I don’t know if that’s the problem, or if I’m imagining problems, but whatever it is, it hasn’t impeded me wearing it.  And I wouldn’t mind if the sleeves were a hair looser for ease of layering (though I think they’ve actually stretched out a bit from the taking of these pictures from so much wear!) 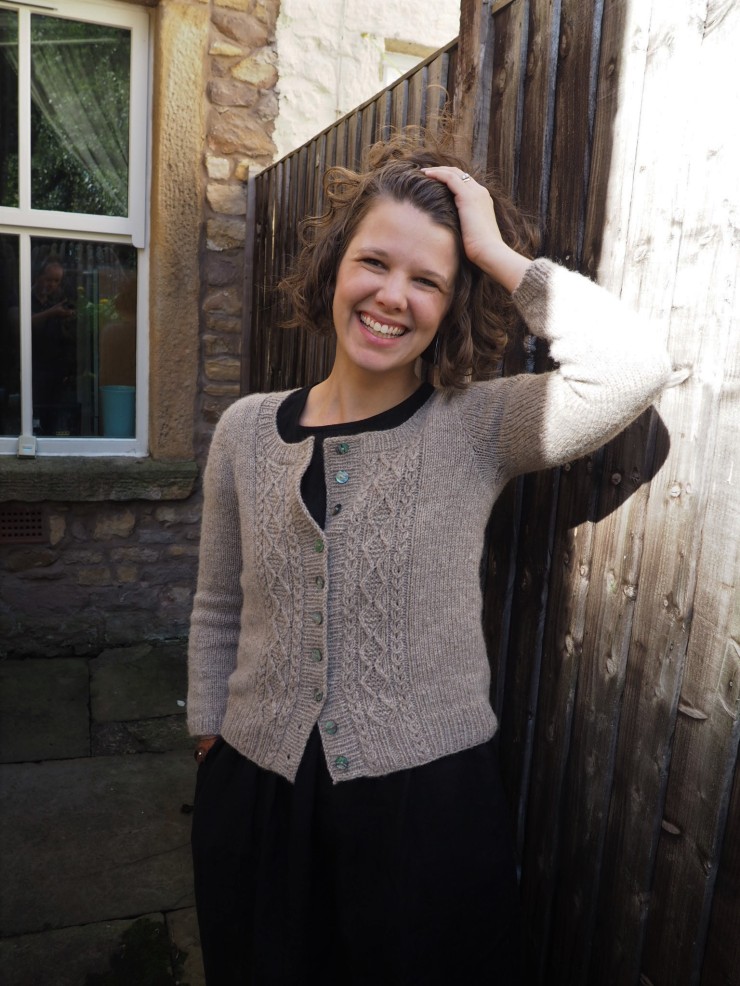 But, on balance, I am so happy with this cardigan! I have really been itching to knit pullovers because of their lack of fiddly finishing bits, but this garment has reminded me how truly useful a good cardigan is!

I hope, wherever you are, your week is ending on a happy note and you have some satisfying knitting to look forward to this weekend! I’m off to Kendal Wool Gathering tomorrow … if I remember to take pictures, I’ll try to do a little post about it before the weekend’s out!

Two years ago today 💛 Months ago, I’d hoped we would walk up to Parkamoor today with Willa and hopefully say hello to Maria @dodgson_wood and @thejohnatkinson but that will have to wait for another time! Instead we stayed home (of course), tried to get a family photo with all of us smiling (second photo - we failed) and tried to recreate our little wedding cake (success!). First photo by the lovely @lovelucyx.photography 💛 happy 2nd anniversary @nickvonderby 🥰
What a funny old week it’s been. Started it and ended it in woollies, with a brief warm spell in between. First photo: Willa’s lush Antler cardigan from @jenacknitwear and a Beloved bonnet that she’s nearly outgrown (both patterns @tincanknits). Second photo: Wednesday was warm enough to crawl around in a nappy and tee. I love this springy print fro @seedling_baby. Third photo: back to woollies for our walk on Friday — another gorgeous Antler cardi from Mimi @knit1prltoo and all tucked up in her Hansel Hap by @gudrunjohnston 💛Cooler temps are fine by me if it means we can get a few more wears out of favorite special knits. #poppyseedsknits #lifewithwillarose #knittersofinstagram #instaknit #knitstagram #knitknitknit #knittersoftheworld #slowmotherhood #handmade #handmadebaby #clothbum #clothnappies #makeclothmainstream #thenappygurus
Stepping into the week with my shortie goldfinch socks. I knit these when we ran our first two at a time sock class at @northern_yarn , nearly two years ago I think! They’re a reminder of a really fun time. And I love this cheerful @westyorkshirespinners bird-inspired colorway (even more so now that I’ve actually seen goldfinches!) and the yarn has worn so so well! So all-in-all: the perfect socks for a gray Monday! 💛❤️💛 #northernyarn #loveyourlys #memademay #myhandsmaking #handknitsocks #sockknittersofig #sockknitting #operationsockdrawer #knittersofinstagram #knittersofig #knitknitknit
It’s cool here today, so I thought it’d be nice to squeeze in at least one more wear of Willa’s woolly @blackisleyarns dungarees! I think you’ll agree she’s as excited by this as I am (second photo). She’s worn these cuffed since she was really small, but now she’s mobile, I think they’re really coming into their own — they let her move so freely and give her some extra padding on the knees! She actually still has some room to grow in the legs and torso and the wool fabric is so stretchy. I’m wondering if it’s foolish to think she might get a little more out of these next autumn. Here’s hoping! Pattern is Willums Overalls by @petiteknit and yarn is Black Isle Yarn Shetland Sport from #eyf2018 #myhandsmaking #poppyseedsknits #knittersoftheworld #knittersofinstagram #instaknit #knitstagram #slowmotherhood #ecomama #handmadebaby #babyknits #makersgonnamake #makermama
#memademay double act: Willa’s Rigmor’s Summer Shirt by @petiteknit had it’s first outing today (along with some second hand trousers) and I’m wearing my Southwell Cardi by @oliveknits. I didn’t think while knitting it that this would be such a wardrobe staple, but it turns out this light blue dyed by @sherwoodyarn goes with pretty much everything in my wardrobe. Worn with a 4+ year old tee from Uniqlo which is my favorite shape ever (I one day hope to use it as a template for making my own!) and new trousers from @seasaltcornwall which were the answer to my search for some high-waisted comfortable jeans. I wear them all the time. #myquarantinebuddy #poppyseedsknits #memademay2020 #myhandsmaking #ootd #knittersoftheworld #knittersofinstagram #knittersofig #makersgonnamake #makersmovement #slowmotherhood #ecomama #lifewithwillarose
My ability to resist casting on new socks (see previous post) is severely compromised by the presence of these skeins in the house. First order of @fabfunkyfibres and oh, are they beautiful. Arrived so speedily and some really awesome customer service too! 🌈🌈🌈 one of these will definitely be hopping on the needles before *too* long #sockknittersofinstagram #operationsockdrawer #sockknitting #socklove #knittersofinstagram #knittersofig #sockknittersofig