Hi friends, and happy Wednesday! I realized it’s been ages since I talked here about what’ on my needles, so thought I’d put together a little Wednesday WIP round up, complete with some new project plans!

I’ve been a bit in  … the doldrums is too strong a word, but an ever so slight funk with my knitting.  I’ve cast on a lot of garments in the past few months, and between that and all the sweaters I want to be knitting right this second, I’ve had a bit of WIP and stash overwhelm.  I’ve been knitting lots (always a good thing), but have found myself not taking the time to enjoy what I’m working on because I’m so busy thinking about what’s next.  So I’m trying to work on that!

That fog has begun to lift a little, not because of some heroic mindfulness on my part, but because, all of the sudden, a very large WIP is near completion:

This is my Lotta dress by Marie Greene, from Laine Vol. 5. I didn’t take it with my on my long September trip to the US as it’d gotten too big and bulky, and since I’ve been back, I’ve worked on the skirt here and there when I needed something totally mindless.  Then the other day I tried it on (for the first time — whoops!) and realized it was time to start the dress’s ribbed hem!  Since taking this picture, I’ve already cast off the neck and knit one placket … one more to go (which is a matter of rows!) then a little seam for the front pleat, weaving for the ends and to the blocking baths it’ll go!

I’ve also got a much more recent WIP — a Harvest Cardigan by Tin Can Knits, which I’m knitting for a class we’re currently running at Northern Yarn.  It’s been so much fun to see everyone’s individual cardigans grow.  I’ve chosen to knit mine in West Yorkshire Spinners Jacobs Aran in Dark Grey.  I love the toothiness of this yarn and know I’ll get tons of wear from the finished piece:

I’m cropping the length and adding pockets and happy to report this is well on its way to being done (I’ve knit more since this snap!)  Tonight’s our last class, where we’ll be getting sleeves going, so it’ll just be a matter of getting those finished and knitting the bottom garter band.  This feels like a bit of a bonus garment.  Although obviously I planned to teach the class, I sort of forgot it was going to mean I got a new finished cardigan that I was forced to work on with some single-mindedness.  Hopefully I can keep that momentum after class ends tonight!

My St. Catherines by Kate Davies has also grown since I last wrote about it … though I haven’t touched it for weeks and it’s in danger of being lost in UFO land.  Which can’t happen because I’m totally in love with it. 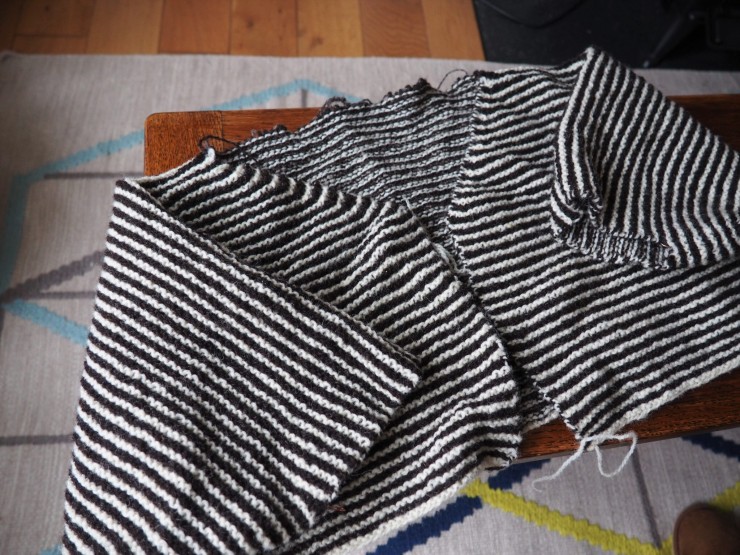 I realize it looks a bit like a zebra blob, but I’ve actually finished the main part of the body and the start of the dolman sleeves. As is so often the case with me, the fact that next steps involve picking up lots of stitches, combined with a busy few weeks, has meant this has languished.  But I will get back to knitting this in the next few days.

There are some other WIPs …. but these are three that I’m thinking about most right now.  I’ve already decided that I need a colorwork pullover in my life, so am planning to start Threipmuir by Ysolda Teague once Lotta is off the needles:

I’m happy I’ve been focusing so much on garments, but also think I might need a few smaller projects for some finishing gratification.  I’m so excited about AC Knitwear’s new ebook on helical knitting and have been intending all week to cast on a helical stripe cowl for Mr. N … if I could just find a moment:

And I’ve even got some yarn wound and waiting in the wings:

Those lovely rusty brown cakes are from Woollen Flower, which I picked up at Yarndale.  They’ll become a Thunderstorm Toque — I am so excited to knit with them.  And one (or both) of the cakes on the right are going to become a pair of Parkamoor Socks!  The top is Woolly Mammoth Fibre Co’s brand new natural sock, which I got on preorder. The bottom skein is Black Isle Yarn’s new no nylon sock yarn, another Yarndale purchase!  I love them both so much… I’m thinking of casting on a pair in each?  Crazy?  Maybe! But I think I’ll enjoy every stitch.

Speaking of the Parkamoor Socks, I’ve been so excited and pleased about the really lovely response to them — it’s been so much more than I ever imagined!  There’s been a little chat about a KAL … something very casual, most likely over on Instagram.  I’ll post over there about it later this week, but if you’d like to join in, I’d love to have you!  Any already in-progress socks will of course be included, and you won’t have to finish to be eligible for a prize.  And if you’d like to get the pattern but haven’t managed it yet, you’ve still got a few days to snag it at 15% off by using the code SOCTOBER. You can find the pattern here.

I’d love to hear what WIPs, new or languishing, you’re thinking about this week in the comments!

4 thoughts on “Late October State of the Knitting”