I recently finished a few big projects and found myself weighing up casting on a new project versus finishing up a few longer standing WIPs.  In a virtuous fit, I decided WIP finishing was the way to go, especially as I’ve got three cardigans on the needles, all of which I love the look of — and I’ve been feeling a lack of cardis in my wardrobe of late.  I was excited about my plan until I realized, with horror, that all three cardi WIPs were at or near a certain point.  You know knitters talk about getting stuck on sleeve island?  Well, I’ve spent some time there for sure, but recently, I realized there’s another bit of sweater–well, cardigan knitting–that I get bogged down at every time … button bands.  And thus, I’m adding a new location to sweater geography … button band isthmus. 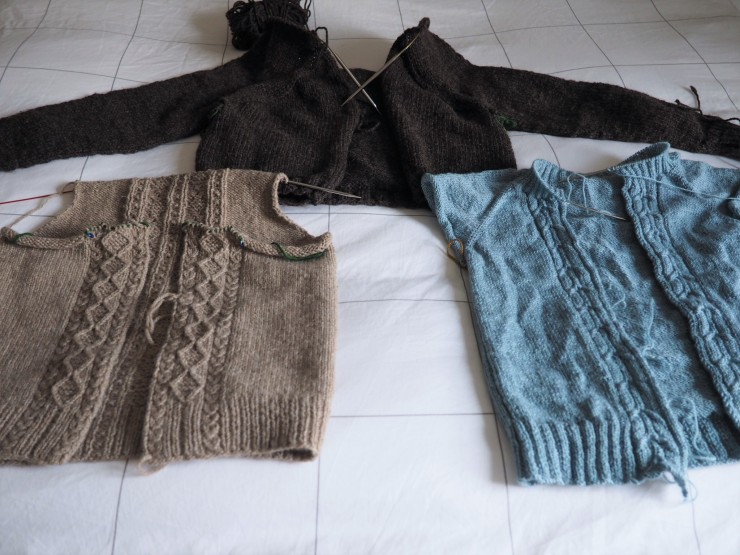 Button Bands.  Those little strips (see, like an isthmus!) … trying to pick up the right number of stitches, inevitably having to redo it multiple times, all just to knit a few tedious rows to make a band that’ll join (also like an isthmus!) your two cardi halves.

I really don’t like them.  Sleeves might take awhile, but at least they can often be done as a bit of mindless knitting.  Button bands though, require focus and concentration, without being interesting.  And the fact that the knitting itself can be quick just makes them worse, in my book … as soon as you get into the swing of one side, it’s already over, you have to cast off a ton of stitches, and do it all over again on the other side, blergh!

I inevitably find myself slowing up when I know a button band is around the corner.  I finished the yoke decreases on my Carbeth cardigan, for instance, on Sunday, then abandoned work on it til this evening, when I worked up to making myself pick up those stitches.

Knowing that button bands often catch me out, I resolved some time ago to always do them before the sleeves on a top down cardi, so I wouldn’t be faced with them at the tail end of the project.  That was my plan when I set down my Southwell cardigan when we moved last summer … that I would next attack the button bands.  That poor cardi is still waiting: 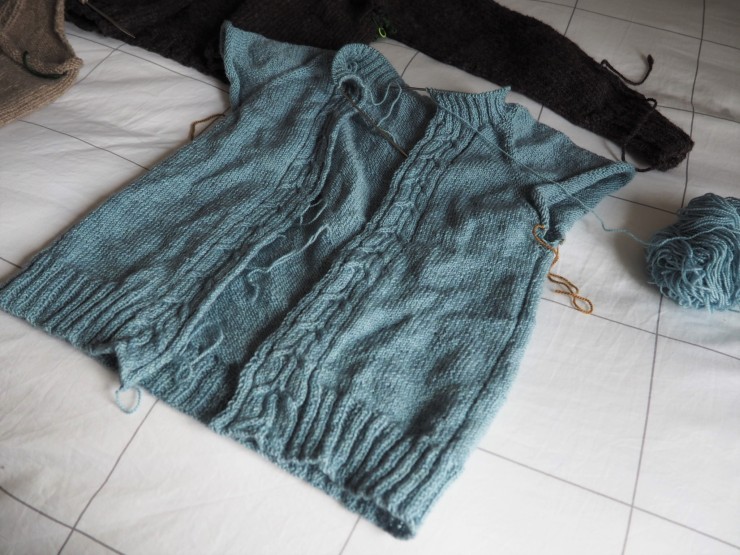 And I’ve already resolved to do button bands before sleeves on my gorgeous Incunabula. With the back nearly done and just two small fronts to knit, I can already feel the button band bogey man looming large:

So, this weekend’s plans include spending some time trying to cross button band isthmus.  Wish me luck.  It will be tedious, but at least, in the scheme of things, it will be brief … I’ve already got stuck in this evening on Carbeth (the low hanging fruit), so I’m going to try to keep the momentum.  And then, with two of these WIPs, it’ll be time to set sail for sleeve island. Do you have any big knitting plans this weekend?  And ss there a particular point in projects that always stalls you out …. I’d love to hear about it in the comments!

20 thoughts on “On Button Band Isthmus …”

#sockamnesty2020 update: one pair complete! 64 stitch socks with a true afterthought heel — I used the instructions for spiraling heel decreases from the Heartgyle Socks in @jenacknitwear Boost Your Knitting, and the fit is perfection! Yarn us @scrumptiouspurl BFL base in the Cake for Breakfast colorway (thanks again Mom @knit1prltoo 💕) with contrast heels in @westyorkshirespinners Signature 4ply in Milk Bottle from @northern_yarn 💕I promised I wouldn’t cast on any more socks until I finished a few in progress pairs, but I might have to make an exception soon so I have another plain project to work on on walks! #steppingoutkal #myhandsmaking #sockknitting #sockknittersofinstagram #knittersofinstagram #knittersofig #sockknittersofig #handknitsocks #operationsockdrawer #sockamnesty #knitknitknit #knitallthethings
Two years ago today 💛 Months ago, I’d hoped we would walk up to Parkamoor today with Willa and hopefully say hello to Maria @dodgson_wood and @thejohnatkinson but that will have to wait for another time! Instead we stayed home (of course), tried to get a family photo with all of us smiling (second photo - we failed) and tried to recreate our little wedding cake (success!). First photo by the lovely @lovelucyx.photography 💛 happy 2nd anniversary @nickvonderby 🥰
What a funny old week it’s been. Started it and ended it in woollies, with a brief warm spell in between. First photo: Willa’s lush Antler cardigan from @jenacknitwear and a Beloved bonnet that she’s nearly outgrown (both patterns @tincanknits). Second photo: Wednesday was warm enough to crawl around in a nappy and tee. I love this springy print fro @seedling_baby. Third photo: back to woollies for our walk on Friday — another gorgeous Antler cardi from Mimi @knit1prltoo and all tucked up in her Hansel Hap by @gudrunjohnston 💛Cooler temps are fine by me if it means we can get a few more wears out of favorite special knits. #poppyseedsknits #lifewithwillarose #knittersofinstagram #instaknit #knitstagram #knitknitknit #knittersoftheworld #slowmotherhood #handmade #handmadebaby #clothbum #clothnappies #makeclothmainstream #thenappygurus
Stepping into the week with my shortie goldfinch socks. I knit these when we ran our first two at a time sock class at @northern_yarn , nearly two years ago I think! They’re a reminder of a really fun time. And I love this cheerful @westyorkshirespinners bird-inspired colorway (even more so now that I’ve actually seen goldfinches!) and the yarn has worn so so well! So all-in-all: the perfect socks for a gray Monday! 💛❤️💛 #northernyarn #loveyourlys #memademay #myhandsmaking #handknitsocks #sockknittersofig #sockknitting #operationsockdrawer #knittersofinstagram #knittersofig #knitknitknit
It’s cool here today, so I thought it’d be nice to squeeze in at least one more wear of Willa’s woolly @blackisleyarns dungarees! I think you’ll agree she’s as excited by this as I am (second photo). She’s worn these cuffed since she was really small, but now she’s mobile, I think they’re really coming into their own — they let her move so freely and give her some extra padding on the knees! She actually still has some room to grow in the legs and torso and the wool fabric is so stretchy. I’m wondering if it’s foolish to think she might get a little more out of these next autumn. Here’s hoping! Pattern is Willums Overalls by @petiteknit and yarn is Black Isle Yarn Shetland Sport from #eyf2018 #myhandsmaking #poppyseedsknits #knittersoftheworld #knittersofinstagram #instaknit #knitstagram #slowmotherhood #ecomama #handmadebaby #babyknits #makersgonnamake #makermama
#memademay double act: Willa’s Rigmor’s Summer Shirt by @petiteknit had it’s first outing today (along with some second hand trousers) and I’m wearing my Southwell Cardi by @oliveknits. I didn’t think while knitting it that this would be such a wardrobe staple, but it turns out this light blue dyed by @sherwoodyarn goes with pretty much everything in my wardrobe. Worn with a 4+ year old tee from Uniqlo which is my favorite shape ever (I one day hope to use it as a template for making my own!) and new trousers from @seasaltcornwall which were the answer to my search for some high-waisted comfortable jeans. I wear them all the time. #myquarantinebuddy #poppyseedsknits #memademay2020 #myhandsmaking #ootd #knittersoftheworld #knittersofinstagram #knittersofig #makersgonnamake #makersmovement #slowmotherhood #ecomama #lifewithwillarose