We’ve been having a few days of glorious spring weather–especially welcome as we’ve had a friend to stay for a short visit!  Yesterday we woke up to another day of blue skies.   It was my friend’s last day in town, so we decided we’d show her a teeny bit of the Lake District.

After toying with the idea of going a bit further afield (and vetoing it since we don’t have a car still and the bus ride was going to significantly cut into the time we had), we set our sights on Windermere and Bowness, where Mr. N and I went for a minibreak last fall.  It’s only a short train ride from Lancaster, and the two little towns are chock full of cute shops and galleries, perfect tootling territory. 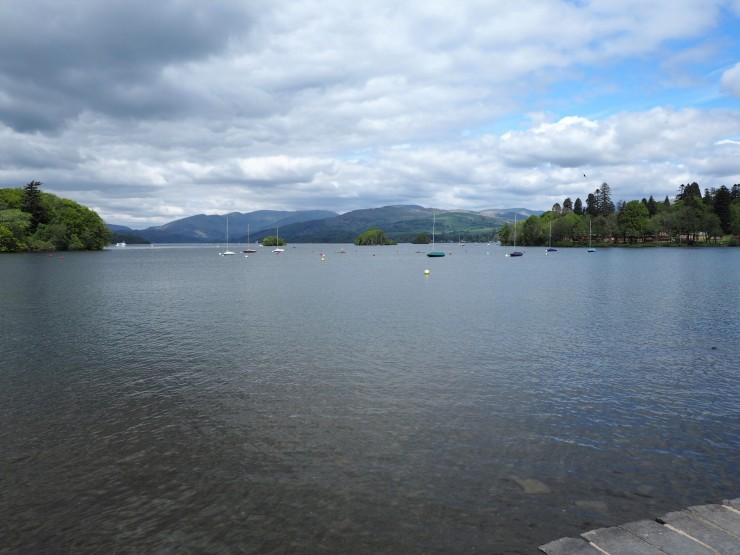 After we had our fill of going in and out of independent shops, we made our way down to Lake Windermere.  When Mr. N and I were there last fall, on a mizzly Saturday in October, we could barely seek the lake for the crowds!  Yesterday was still busy, but because it was a weekday, not quite as crowded!  We enjoyed a little packed lunch overlooking the lake, then struck out in search of a bit of a walk.

At first, we thought of making our way to Blackwell, but as we headed off in that direction realized it’d be a rather long walk on roads that weren’t particularly pedestrian friendly.  So we changed course for a walk up Brant Fell, which began right from the center of Bowness.

Along the way, we came across bluebells:

And intriguing stumps filled with old coins!  I had seen something similar before walking around Arnside — dead trees of various types with old coins hammered in.  But nothing on the scale of this stump! 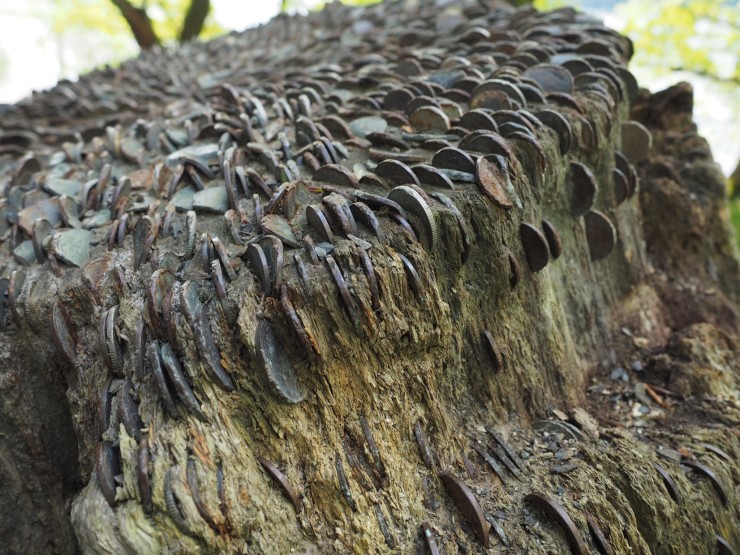 Here’s a more restrained one we encountered on the way up: 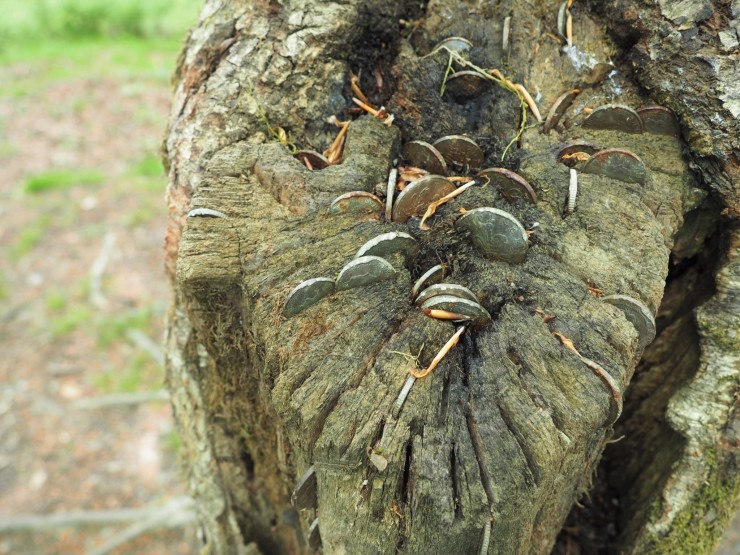 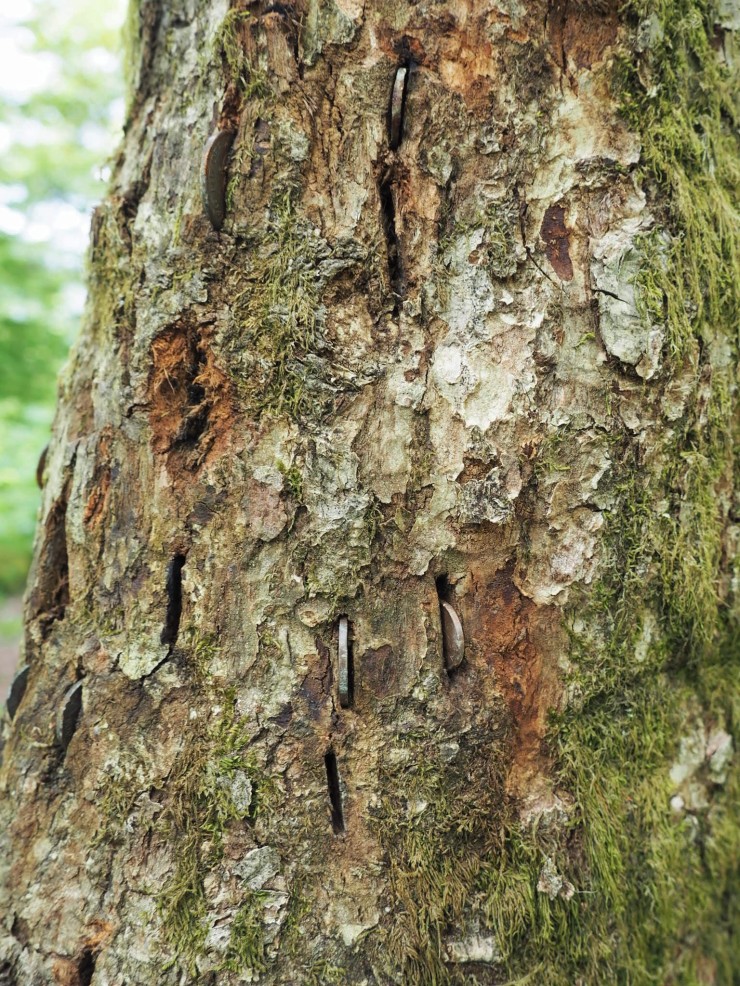 I did the briefest of searches to find that these are known as wishing trees, and that the coins represent wishes or, sometimes, very specifically, hopes for a cure for an illness.  I’d love to know a bit more about where the practice originated from, how old it is, and how it’s changed over time!

Anyway, after a short, steep ascent out of town and a brief woodland walk, we came to the final little climb. 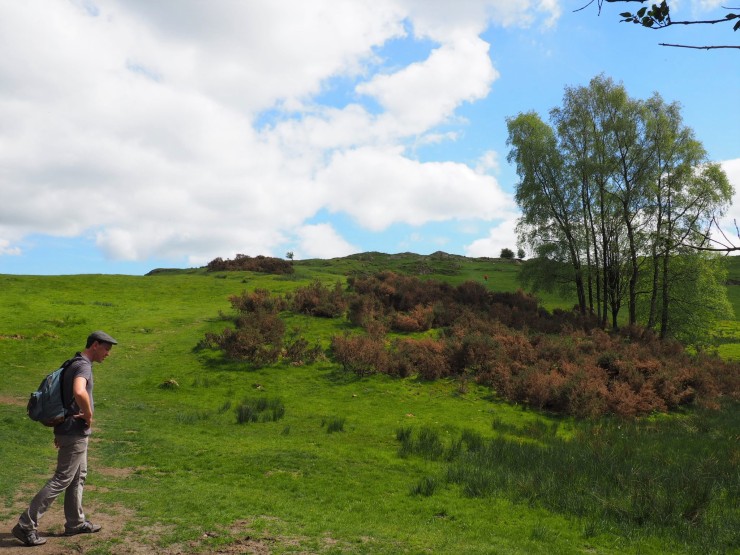 Everything was so lush and green 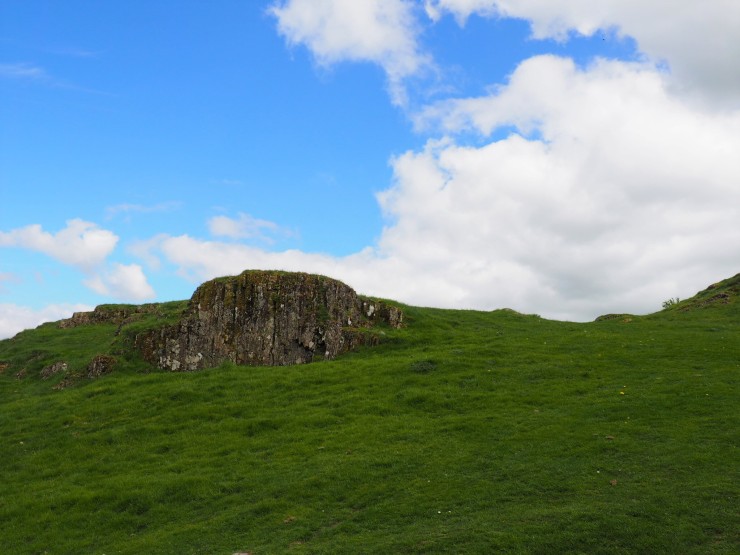 We had stunning views … and the place almost all to ourselves. 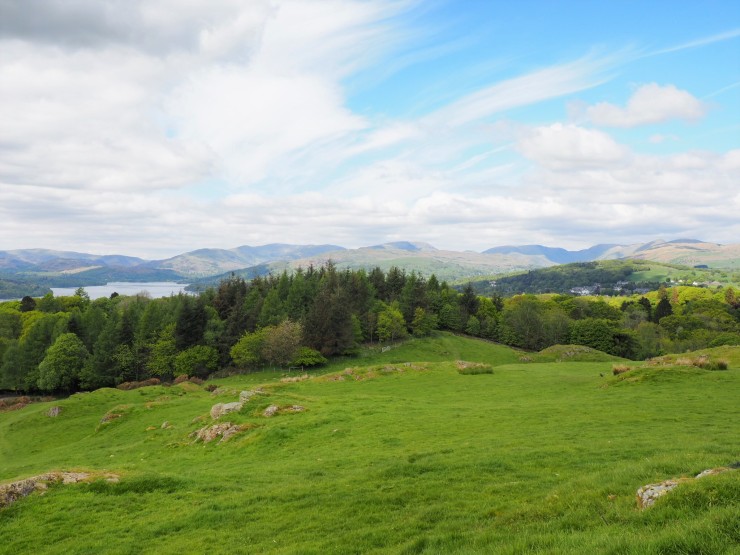 Despite it being a fairly busy day in town, the top was nearly deserted — which was just what we found when we went to Orrest Head last fall, too.  Windermere and Bowness might be busy, but it’s not hard to get away from the crowds and get some spectacular views! 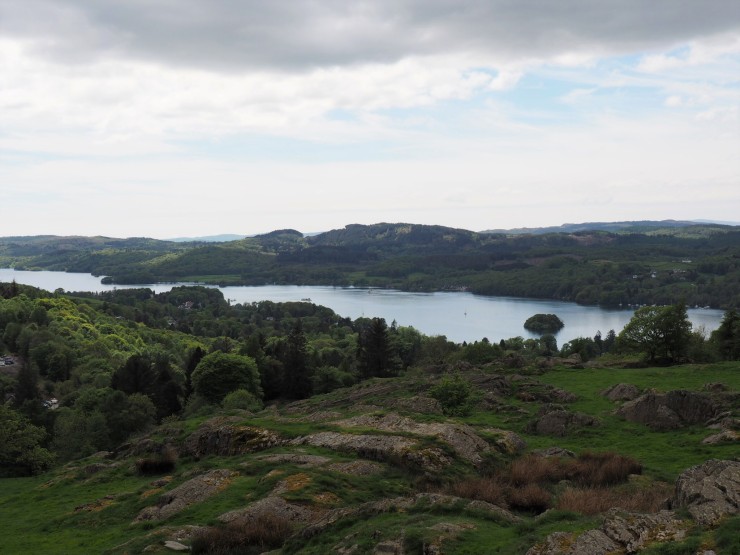 A bit of cloud cover rolled in, which we welcomed — we were quite warm from the brisk walk.  We relaxed at the top and took in the views … I even squeezed in a few rows! 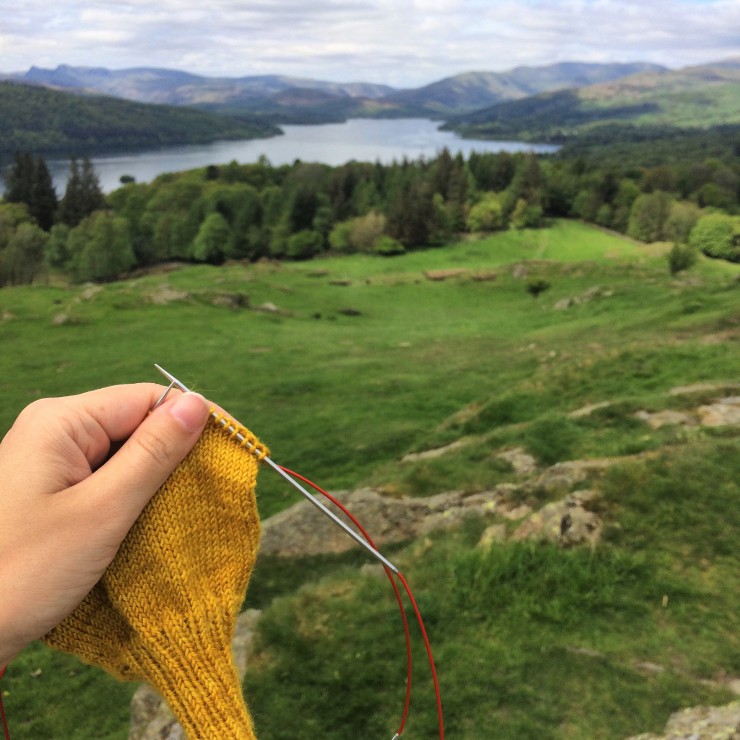 After a very pleasant sit, we made our way back down.  We found evidence that the sheep had been about 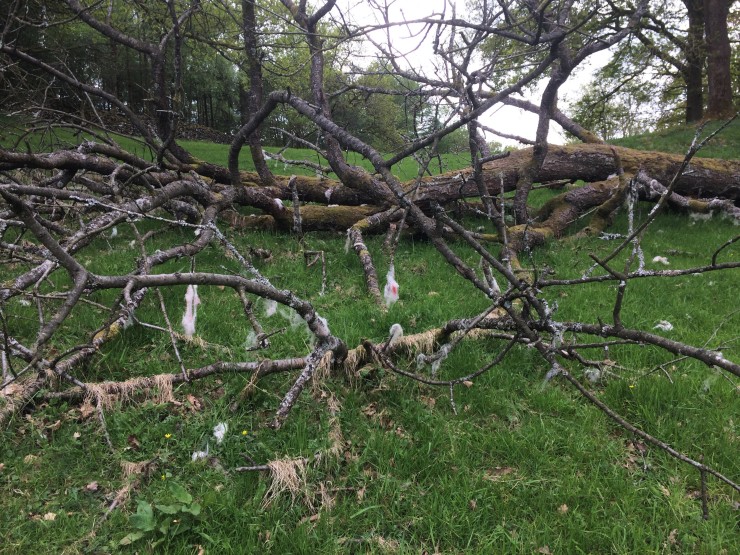 But sadly no up close sheep spottings!

I did come home with a woolly souvenir, though: 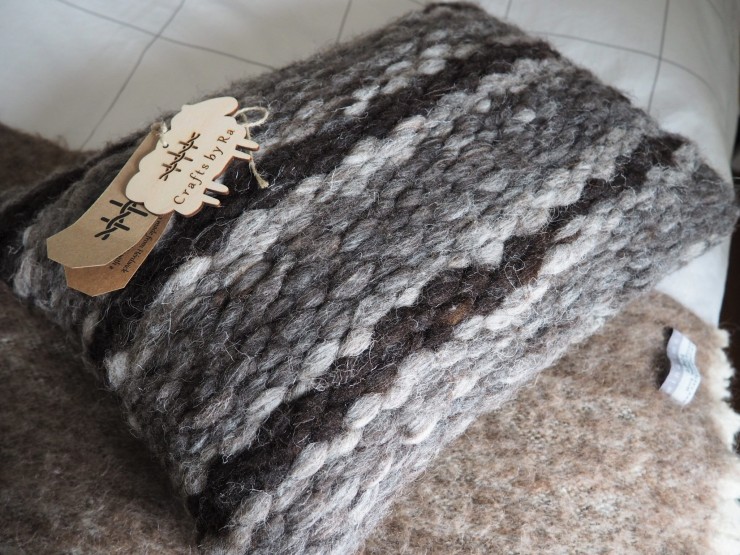 This beautiful Herdwick pillow, handmade in Cumbria. I couldn’t resit. Rachel keeps sheep herself and weaves these gorgeous pillows, as well as some really stunning rugs.  I got this at the lovely Cook House Gallery, but it looks you can also order them directly from Crafts by Ra.  It it woolly, delightful, and beautifully made — I know we’ll enjoy it for years to come!

A beautiful day with lovely friends in the sun — not bad for a Tuesday!

PS Thanks for your kind comments and congratulations on my last post … I got snowed under with work and then visitors so I’ve been slow to respond, but I’ve read them all and each one means so much to me!