Also known as … Sock Knitting Does Not Meet Expectations

Well, the first Thursday of the month is here again, and sock knitting friends, I’m afraid I have very little to show for it!  I’m not sure what’s happened to my sock knitting mojo these past few months!

It’s not that I don’t need socks … as some of my recent Instagram posts have suggested, woolly socks are in pretty constant rotation — my sock drawer could certainly use a few pairs: 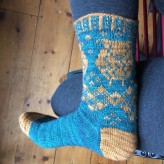 And it’s not that I haven’t had ideas about knitting socks — they seem to just not be panning out too well lately!  Like, I got this lovely Northern Yarn Lonk sock yarn recently and had some ideas about a simple sock, with a little twist, of my own design that I wanted to whip up with them:

And I’ve cast on and failed to make progress multiple times — first because of problems with my initial idea, then because I didn’t like gauge on the needles I thought I’d use, and finally because I made the darn things too big. Argh!

And after I picked up two skeins of this lovely no nylon sock yarn from Williams Wools at Kendal Wool Fest (more on last weekend’s adventure soon) I had some grand plans for a fun, simple colorwork sock.  Only to find after swatching that the contrast of the two yarns wasn’t strong enough for colorwork.  Sigh!

So, in desperation, I’ve cast on for some plain jane vanilla socks with the Williams Wool.  I’m going to make them fraternal twins … and the loveliness of the wool (in grey and yellow, my fave) is making up a bit for my recent sock misadventures!  And I’m hoping to put in a few cute details to improve the fit of this sock and make it a bit more exciting!

I’m hoping to get the Lonk socks back on my needles soon though, and I’m also excited to try out Ysolda’s new sock pattern, Rakkaus, when I have a moment.  It features an afterthought heel, which I love, but also has a gusset (the lack of which makes some people find afterthought heel socks fit less well) so I’m very curious to see how that all works!

Go check out what my fellow sockalongers are working on this month.  Paula blogs over at Spin a Yarn; Stefanie’s got a great post up about her sock adventures at Wooly Cakes and Wooden Spoons; and Kat’s over at Felinity Knits. We’re always happy to have company on our sock adventure — we write about sock knitting on the first Thursday of each month 🙂

That’s all for now — what have you been working on lately?  Apologies if this feels a bit rushed and scattered — it’s been quite a week on the work front, and my brain feels like it’s functioning at half speed!

10 thoughts on “Once Upon a Sock: November Edition”